The school's advisory board consists of distinguished alumni, business leaders, and eminent academics who generously donate their time to help us advance our school. They  provide a valuable external perspective on our current programs and are active in helping us shape future directions. In addition to participating in periodic board meetings, our advisors are actively engaged in on-campus activities, student career advising, and fundraising efforts. 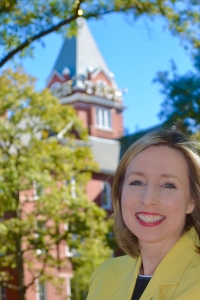 Dr. Elizabeth Gadsby is the Head of Product Development and Clinical for the Kimberly-Clark Sofusa™ Business unit creating transdermal drug delivery solutions. Elizabeth has served in a variety of leadership roles in new product commercialization, logistics, marketing, quality, and technology development since she joined the company in 1992. She holds over 25 patents for her innovations and has been involved in commercialization of several new products.

Elizabeth earned her Bachelor’s degree in microbiology at the University of Florida and her Ph.D. in biochemistry at the Georgia Institute of Technology. At Georgia Tech she studied under Prof. Larry Bottomley and her dissertation was titled “Atomic Force Microscopy of DNA-Drug Interactions”. She also was an inaugural member of the NSF TI:GER Innovation program which linked Georgia Tech science and engineering students with MBA and Emory Law students. Her continuing education includes programs at Smith College, Wharton, Kellogg, and Dallas Theological Seminary.

Elizabeth and her husband, James, reside in Atlanta, Georgia and actively serve in the community through their church, theatre, and the Peachtree Road Race. 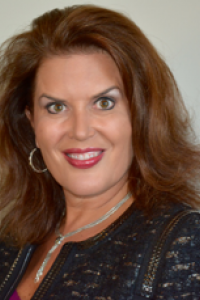 Kelly Sepcic is President of ArrowInno,  specializing in product design  and  innovation consulting.

She served Vice President for Frito Lay North America  and PepsiCo’s Research and Development from 2007-2015.  She led PepsiCo’s global strategy and portfolio management and multiple VP roles in product development and innovation.  She served as the Dean of PepsiCo’s Global R&D University for Experience Design.

Prior to joining Frito Lay in 2007, she spent 14 years with The Coca-Cola Company in Atlanta, GA.  She was the key leader responsible for core brand innovation for all Coke TM formulations globally, including Coke Zero and all flavor line extensions for colas.

She received her PhD and MS degrees in Chemistry from the Georgia Institute of Technology. She began her R&D career with Milliken & Company in Spartanburg, SC and Solvay Pharmaceuticals in Marietta, GA.

She is passionate for innovation and has been an author on several technical papers and an inventor on multiple international and US patent applications in the area of flavor and sweetener technology. She serves on the Georgia Institute of Technology School of Chemistry Advisory board and the Circle Ten STEM Scouts committee.

Kelly lives in Plano, Texas with her husband, two daughters and two stepsons. She enjoys playing  golf, tennis and classical piano.  She is an avid traveler and has worked and visited more than 40 countries. 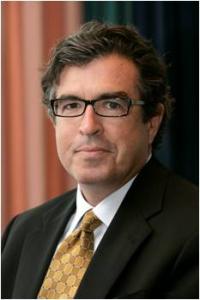 After obtaining his B.S. and Ph.D. in chemistry from the Georgia Institute of Technology, Steve joined Monsanto in 1984, focusing on the development of enzymes and genes to confer glyphosate-tolerance to crop plants.  Steve is co-inventor of the gene which confers the Roundup Ready® (RR) trait, the most widely-used biotechnology trait in agriculture, and led the FDA and USDA regulatory science safety studies for RR soybean, cotton and canola.

Following several years of research in plant metabolic engineering and co-leadership of the Soybean Business Team, Steve assumed the role of Vice President, Biotechnology in 1998. During Steve’s tenure, Monsanto Biotechnology strengthened its industry-leading position in the discovery, development and commercialization of crop biotechnology traits. Steve assumed his current role in Monsanto’s Global Strategy Group in 2011 and has responsibility for technology-rich growth opportunities and Monsanto’s corporate venture capital program, including the Monsanto – Atlas Venture Seed Fund Alliance in Cambridge, MA.

Steve is a member of the Board of Directors of RaNA Therapeutics, Inc., and he serves as Chair of the External Advisory Board, Georgia Institute of Technology Institute for Bioengineering and Bioscience.  Steve received his MBA from the Kellogg School of Management of Northwestern University in 2007 and is a Monsanto Distinguished Science Fellow. Steve and his family reside in St. Louis, Missouri. 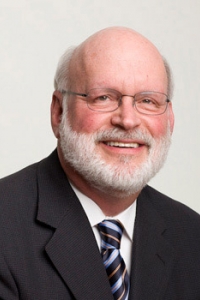 Bill Needle is currently the head of the intellectual property department of Ballard and Spahr LLP. He is also an adjunct law professor at Emory (since ’83) and Georgia State University (since ’90). He received a B.S. degree in chemistry from Georgia Tech in 1967 and a J.D. from Emory University in 1979. He has practiced intellectual property law exclusively for 40 years and founded the IP law firm Needle & Rosenberg. In 2008, after 25 years, Needle & Rosenberg merged into Ballard Spahr. 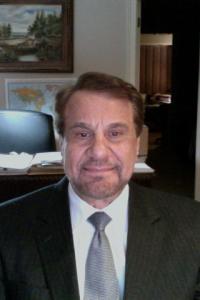 Atif M. Dabdoub, Ph. D. Chemistry, Georgia Tech., 1976. He started his career with Mayo Chemical Co., in Atlanta, Georgia, as director of R&D. Twelve years later he became the President and CEO, while Mayo became the largest and most sophisticated producer/supplier of organic phosphorous compounds and polymers in the world. In 2003, he teamed up with his long-term business partner, Jim Harris, and co-founded UniChem Technologies, Inc (UTI). Today, UTI is a technological giant that specializes in oil and gas production, pulp and paper processing, industrial water treatment, minerals mining as well as customized products and services. 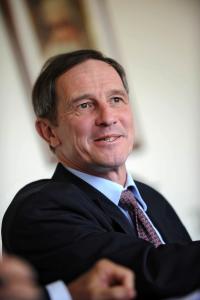 Dr. Léopold Demiddeleer has a Ph.D. in Physical Chemistry from the Brussels University and is currently executive V.P. and Director of Future Businesses of SOLVAY S.A., a Belgian chemical group with a global reach. Having started his career in 1976 by teaching mathematics and physics, he joined the SOLVAY company in 1981.

Starting in catalyst research, he successively led different R&D entities of the group - polyethylene, high performance materials, global polyolefin’s research - before being appointed New Business Development Director for the Solvay Group in 2000. He is currently President of the EIRMA Board (European Industrial Research Management Association) and sits at the Advisory Board of 3 Venture Funds (Pangaea II, Vancouver - Conduit Ventures Ltd, UK – KAM, Korea).

He is a board Member of SolviCore, a joint venture between Solvay and Umicore for the development of fuel cells materials and a member of the academic strategic committees at Georgia Tech (Atlanta - USA), CEA (Grenoble - France) and Manchester Business School (UK). He was appointed as a member of Académie Royale des Sciences, des Lettres et des Beaux-Arts de Belgique since 2009. 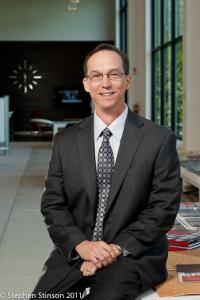 Dr. David Moody is a 1988 graduate of the Georgia Tech School of Chemistry where he was part of Dr. Charles Liotta's research group. He currently serves as President of Milliken's Floor Covering Division. He was previously President of Milliken Research Corporation. He is the past Chairman of the South Carolina Research Authority. 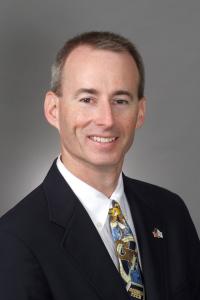 Dr. Jeffrey Hurley is a 1990 (M.S.) and 1992 (Ph.D.) graduate of the Georgia Tech School of Chemistry where he was part of Dr. Charles Liotta’s research group. He currently serves as the Vice President of Nonwovens for NicePak Products of Orangeburg, NY. He has previously served on the Georgia Tech Alumni Association Board of Trustees and is an active member of numerous industry trade associations. 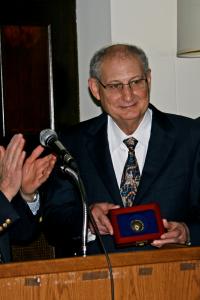 Dr. Dalton is the B. Seymour Rabinovitch Chair Professor of Chemistry (Emeritus) at the University of Washington and Executive Director of the National Science Foundation Science and Technology Center on Materials and Devices for Information Technology Research. He is the recipient of awards and honors from the following national professional societies: American Chemical Society, Materials Research Society, Institute of Electrical and Electronic Engineers, Optical Society of American, International Society of Optics Photonics, and the American Association for the Advancement of Science. 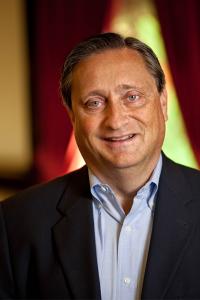 Dr. Cobb is the CEO of The InnovaNet Group LLC, a management consulting firm focusing on helping companies grow their businesses, develop new products, and improve their operations. He is also Managing Principal of Criterion Scientific LLC, a consortium of chemical and materials testing labs, based in the US and India. His expertise includes executive leadership, strategic planning and execution, technical product development, operations improvement, and organizational development and training. 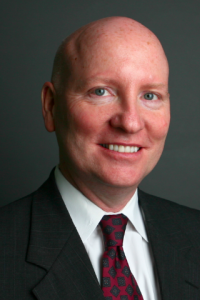 Dr. Bush founded Decision Strategies, Inc. in 1993 after serving as VP of R&D and Strategy for Roche Diagnostics where he had responsibility for technology licensing and new venture development in the biotechnology and medical device areas. His consultancy facilitates companies in multiple industries through complex business and legal decision-making in addition to creating innovation strategies for an adaptive approach to dynamic markets. Typical engagements include creation of novel product concepts, development of cost-advantaged operations, modeling complex dynamic systems, optimizing global logistics, redesign and integration of acquisitions, major capital project investments, resolution of labor-management issues and information technology strategies.