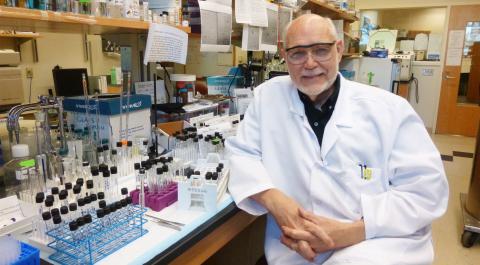 Alfred Merrill, professor emeritus in the School of Biological Sciences and Smithgall Chair in Molecular Cell Biology in the Parker H. Petit Institute for Bioengineering and Bioscience (IBB) — who brought research attention to an important class of organic compounds found in all tissues, including the brain — has been elected as a fellow of the American Society of Biochemistry and Molecular Biology (ASBMB).

“This honor is only bestowed to our most distinguished and established members,” says ASBMB president Toni Antalis. ASBMB Fellowships were established in 2020 “to recognize our members for their meritorious efforts to advance the molecular life sciences through sustained outstanding accomplishments in scientific research, education, mentorship, commitment to diversity, and service to the society and the scientific community.”

“It is an honor to be selected as a fellow of the ASBMB, an organization that was established over a hundred years ago and promotes research and training in biochemistry through newsletters, conferences and publication of several of the most highly regarded journals in the field, such as The Journal of Biological Chemistry and The Journal of Lipid Research,” Merrill says.

Merrill was nominated by George Carman, Board of Governors Professor of Food Science, and Founding Director of the Rutgers Center for Lipid Research in the New Jersey Institute for Food, Nutrition, & Health at Rutgers University. “Al has made impressive contributions to science through both the discoveries by his laboratory and his assistance to others through service activities,” says Carman, who was named an ASBMB Fellow in 2021.

Merrill has been an IBB member since he came to Georgia Tech in fall 2001. He was an adjunct professor in the School of Chemistry and Biochemistry from 2003-2016. Merrill’s Georgia Tech research affiliations include the Center for Bio-Imaging Mass Spectrometry, the Integrated Cancer Research Center, the Center for ImmunoEngineering, and the Center for Drug Design Development and Delivery.

Merrill is also a member of the Discovery and Developmental Therapeutics Research Program at Emory Winship Cancer Institute.

Lipids are hormones, fats, oils and waxes that store energy and act as messengers within the body. A class of lipids, sphingolipids — named after the mysterious sphinx of mythology because of their enigmatic nature to early researchers — are important in tissue development, cell structure, cell-cell communication and signal transduction (how a cell responds to substances outside the cell).

Merrill began researching sphingolipids while an assistant professor in the Department of Biochemistry at Emory University School of Medicine in 1981. “I wanted to branch out from my areas of previous training, which had been on the mechanisms of action of coenzymes and glycerolipids,” he says. “The sphingoid base biosynthesis pathway looked promising because few other scientists were studying it and my background in these two areas somewhat uniquely prepared me to tackle that challenging field. It was also helpful that I like to develop new methods for analyzing biochemical processes, and one of the first things that I did was develop easier ways to study sphingoid bases and their metabolism.”

The ASBMB notes that Merrill developed quantitative methods to measure sphingolipids and was a major contributor to mass spectrometry–based lipidomics research guidance. Merrill helped determine how the lipid backbones of sphingolipids are made and how they function in cell signaling and disease.

Three research studies that Merrill conducted in 1986 detailing sphingolipids and cell signaling were designated “Classics” in 2016 by the Journal of Biological Chemistry because of their scientific influence.

Merrill is a fellow of the American Association for the Advancement of Science and an associate editor of the Journal of Lipid Research. He was a member of the editorial board of the Journal of Biological Chemistry for 20 years.

Merrill is one of five Georgia-based scientists who received 2022 ASBMB Fellowships. The others are:

Bioengineering and Bioscience
People and Technology