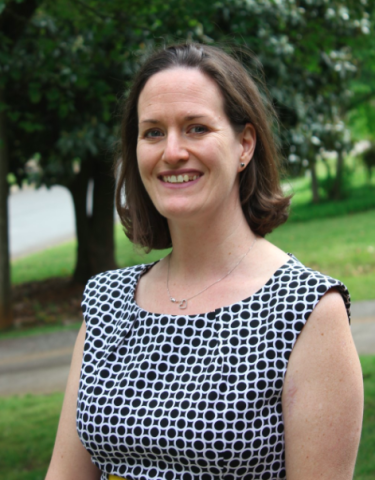 It was nearly 10 years ago that the Center for Chemical Evolution, a joint research project of Georgia Tech, the National Science Foundation, and NASA, opened on campus to investigate the origins of life.

In 2020, the Center is now “the premier program in the world investigating compelling questions about how life arose on Earth,” says M.G. Finn, professor and chair of the School of Chemistry and Biochemistry and James A. Carlos Family Chair for Pediatric Technology.

In honor of her near-decade of work as the managing director of the Center for Chemical Evolution (CCE), Christine Conwell has been announced as the winner of the 2020 Outstanding Achievement in Research Enterprise Enhancement Award.

The honor, presented by the Office of the Executive Vice President for Research, is given to “faculty whose research results have had a demonstrable and sustained societal impact,” according to the Office of the Provost website.

“This jewel in Georgia Tech’s crown would not have been possible without her efforts,” Finn says. “As a jointly funded center by the NSF and NASA, it has been both unique and uniquely successful, bringing together investigators from the U.S. and around the world. This demands administrative skill and leadership of the highest order, and Dr. Conwell has provided exactly that.”

Conwell, who earned her Ph.D. in biochemistry in 2004, returned to Georgia Tech in 2011 to take the reins of the CCE. “I did not appreciate at that point how being a part of this $40 million research enterprise would immerse me in the larger research efforts at Georgia Tech,” says Conwell. “I am absolutely honored to have been chosen for this award. I love what I do every day for the center. I get to interact with teams of amazing people at Georgia Tech and across the country, to do science that is changing the outlook of a field, and educate others about our efforts.”

In February 2020, the Strategic Energy Institute at Georgia Tech named Conwell its new Director of Planning and Operations. The SEI focuses its efforts on integrating, facilitating and enabling programs at Georgia Tech exploring the energy landscape.

The scientific objective of the Center for Chemical Evolution, as stated on its website, “is to demonstrate small molecules within a model inventory of prebiotic chemistry can self-assemble into polymers that resemble RNA and proteins.” It’s not just about the history of molecular evolution on Earth; it’s also about the possible creation of new biopharmaceutical drugs.

“Finding molecules with the ability to self-assemble into RNA- or protein-like polymers, regardless of whether these can be proven to be the ancestors, would undoubtedly create considerable excitement among scientists and the general public, represent a major advancement in the field of molecular self-assembly, and prove abundantly useful to synthetic chemists.”

Conwell worked with CCE Regents' Professor and Principal Investigator Nicholas Hud, and Education Outreach and Diversity Director Christopher Parsons. Conwell managed day-to-day operations of the CCE and its $40 million budget, led collaborative efforts with scientists, and represented the center to NSF and NASA, as well as others within the NSF’s Center for Chemical Innovation program, which CCE is part of.

Finn also praises Conwell’s efforts in engaging the public about the CCE’s role. He credits her passion, experience and communications expertise. Conwell says those aspects of the job, as well as collaborating on interdisciplinary projects with scientists, made the managing director’s position "a really perfect role."

"Beyond the official day-to-day efforts, I love being a part of the collaborative research environment that Tech has created. No day is boring, between chatting up the grad students and postdocs about life and dreams, working with other teams to develop large-scale collaborative teams, or just engaging with other staff to work on streamlining efforts, I could not have asked for a more rewarding experience," Conwell says.