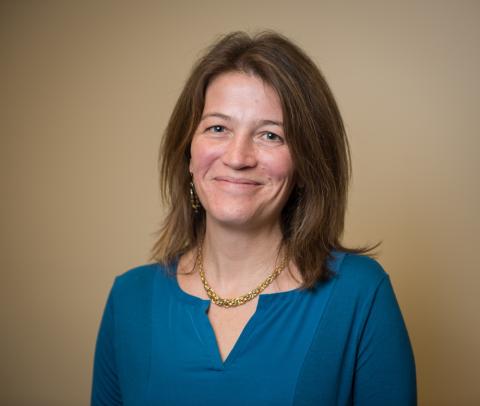 Laura Cadonati has been appointed as the new associate dean for Research in the College of Sciences (CoS) Dean’s Office at the Georgia Institute of Technology effective July 1, 2021.

Cadonati serves as a professor in the School of Physics and as director of the Center for Relativistic Astrophysics at Georgia Tech.

“I am delighted to welcome Laura to the CoS Dean’s Office,” says Susan Lozier, dean of the College of Sciences and Betsy Middleton and John Clark Sutherland Chair. “She is an accomplished researcher and educator whose breadth of experience will be invaluable to the College. I am looking forward to working with Laura in the years ahead on supporting and highlighting the amazing research across the College — and on the implementation of the research component of our CoS strategic plan.”

Cadonati received her Ph.D. in physics from Princeton University in 2001. She joined the Center for Relativistic Astrophysics (CRA) at Georgia Tech in January 2015 from the University of Massachusetts Amherst, and was appointed director of the CRA in July 2020.

“I am honored by the trust the College of Sciences is placing in me,” Cadonati shares, “and I look forward to supporting our faculty in all the ways necessary to advance their research to new levels — and deepening our College’s scientific impact on our campus and in society as a whole.”

As associate dean for Research, Cadonati will focus on cultivating College of Sciences faculty members to develop and sustain excellence in scholarship and research, as well as creating an environment in which innovation, entrepreneurship, and public service are fundamental characteristics of graduates of the College.

She will coordinate the research enterprise and agenda for the College and its stakeholders, and will foster the College’s leadership in developing scientific solutions for a better world.

Cadonati will also focus on identifying new research opportunities, encouraging research collaborations, facilitating partnerships among faculty both within and outside of the Institute, and will execute on the College’s new strategic plan to realize our shared mission and vision.

In addition to a continued embrace of fundamental science, Cadonati will focus on cross-cutting and convergent scientific directions to guide the College’s research investments, specifically elevating the following ongoing initiatives within the six schools of the College:

Cadonati’s own research interests include gravitational waves and particle astrophysics. She has published and co-authored more than 100 peer-reviewed articles, has presented a number of lectures and invited seminars, and has held leadership positions in the Laser Interferometer Gravitational-Wave Observatory (LIGO), including leading its data analysis and astrophysics division at the time of the discovery of gravitational waves — which led to the 2017 Nobel prize in Physics to the founders of the project. As deputy spokesperson for the LIGO Scientific Collaboration, she has facilitated collaborations between LIGO and its partners, including astronomers and particle observatories around the world.

Cadonati is a fellow of the American Physical Society and is a recipient of the prestigious NSF CAREER (Faculty Early Career Development Program) award. She is an associate editor for the European Journal of Physics and also serves on several advisory boards.

In 2018, she received the Institute’s Outstanding Faculty Research Author Award, which recognizes “faculty who most contributed to highly impactful publications describing the results of research conducted at Georgia Tech during the period January 1, 2013, to December 31, 2017” for her work and achievements in ushering the era of multi-messenger gravitational-wave astronomy.

Cadonati is joined in the College of Sciences Dean’s Office by Jennifer Leavey and Carrie Shepler, who recently accepted appointments as assistant deans in the College, also effective July 1, 2021.

About the College of Sciences

The College of Sciences cultivates curiosity, encourages exploration, and fosters innovation to develop scientific solutions for a better world. Our connected community of scientists and mathematicians collaborates across disciplines and challenges to achieve excellence in science, teaching, and research. Working across six internationally ranked schools with the brightest young minds in our fields, we mentor future leaders to identify and push the frontiers of human knowledge, imagination, and innovation.

We nurture scientifically curious students by offering diverse educational and research experiences. As an internationally recognized, preeminent institution in the sciences and mathematics, we help students build empowering foundations in the sciences and mathematics — educating and preparing the next generation of scientists who will create the technologies of the future.

Most of the disciplines within our six schools — Biological Sciences, Chemistry and Biochemistry, Earth and Atmospheric Sciences, Mathematics, Physics, and Psychology — are ranked in the top 10%. We organize ourselves in multidisciplinary research neighborhoods to promote broad exchange of ideas. We also offer exciting opportunities for students to engage in research, and train with top professors in chosen fields.

Our internationally recognized senior faculty and an extraordinarily talented group of junior faculty are genuinely concerned about undergraduate and graduate education, and they bring the excitement of new discoveries in the research laboratory to the classroom. The quality of the faculty and the curriculum, combined with new state-of-the-art facilities and a low student to faculty ratio, ensure the excellent educational opportunities available to our students.

The Georgia Institute of Technology, or Georgia Tech, is a top 10 public research university developing leaders who advance technology and improve the human condition.

The Institute offers business, computing, design, engineering, liberal arts, and sciences degrees. Its nearly 40,000 students, representing 50 states and 149 countries, study at the main campus in Atlanta, at campuses in France and China, and through distance and online learning.

As a leading technological university, Georgia Tech is an engine of economic development for Georgia, the Southeast, and the nation, conducting more than $1 billion in research annually for government, industry, and society.