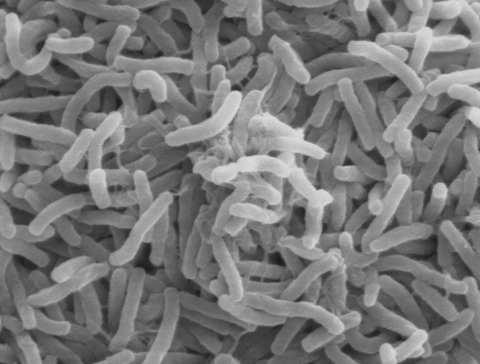 Vibrio cholerae, the pathogenic bacterium that causes cholera, has killed millions worldwide, and is still found in countries where infrastructure doesn’t support clean water. Cholera patients can suffer from severe vomiting and diarrhea, which can lead to fatal dehydration.

One factor V. cholerae uses to cause disease is a toxin-loaded “nano-harpoon,” in the words of Brian Hammer, associate professor in the School of Biological Sciences. “Many pathogenic bacteria, including V. cholerae, are successful in the environment and human body because they compete for food and space by lancing their neighbors with that harpoon. The harpoon’s toxic ‘contact-antibiotics’ kill bacteria from the inside. Thwarting human pathogens will require an understanding of these arsenals.”

Now, Hammer is on a team of scientists from Georgia Tech who have found a previously unknown weapon in the arsenal of cholera bacteria: a toxin that impairs a cell’s membrane and looks like none described prior — hence the title of the team’s research study: “A New Contact Killing Toxin Permeabilizes Cells and Belongs to a Broadly Distributed Protein Family,” published July 21 in mSphere, part of the American Society of Microbiology Journals.

Team members include Hammer (the study’s corresponding author), his graduate student Christian Crisan (the study’s lead author), and undergraduate researcher Catherine Everly; along with assistant professor Peter Yunker and his postdoctoral student Gabi Steinbach of the School of Physics; and professor Raquel Lieberman and her postdoctoral student Shannon Hill in the School of Chemistry and Biochemistry. Hammer and Yunker are members of Georgia Tech’s Center for Microbial Dynamics and Infection; and Hammer, Lieberman, and Yunker are also members of the Parker H. Petit Institute for Bioengineering and Bioscience.

The technical term for V. cholerae’s “nano-harpoon” is a Type 6 Secretion System, (T6SS). “While many microbiologists have focused their efforts on a few toxins made by V. cholerae obtained from patients, we sequenced the DNA of Vibrios from non-human environmental sources and developed computational tools to find new contact-antibiotic toxin genes,” Hammer says of his lab’s work. “In doing so, my student Cristian Crisan, who just defended his Ph.D., discovered a new T6 toxin that doesn't look like any other protein characterized prior. He showed this toxin” — which the team named TpeV (type VI permeabilizing effector Vibrio) — “kills competitors by altering their cell membranes.” Doing so results in cell damage or death.

Hunting through a database, Crisan also discovered that hundreds of other bacteria, including pathogens like Salmonella and Proteus, also carry this novel toxin. “Our current work is studying exactly how this contact-antibiotic works, and ways that bacteria can adapt to become resistant to it and other T6 toxins,” Hammer says.

Cholera remains a well-studied disease since it touches many disciplines including microbiology, epidemiology, aquatic ecology, and water resource management, Hammer says. Outbreaks still occur in places such as Bangladesh, Yemen, and Haiti.

Learning more about V. cholerae’s toxins, and their antimicrobial abilities, could mean more effective ways to deal with antibiotic resistance, now an area of concern for microbiologists.

“We demonstrate that TpeV has antimicrobial activity by permeabilizing cells, eliminating membrane potentials, and causing severe cytotoxicity,” the team writes in its study. “We propose that TpeV-like toxins contribute to the fitness of many bacteria. Finally, since antibiotic resistance is a critical global health threat, the discovery of new antimicrobial mechanisms could lead to the development of new treatments against resistant strains.” 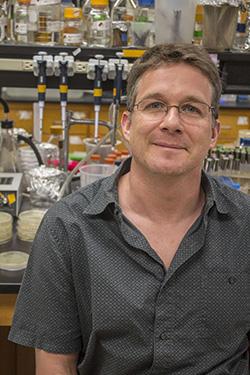