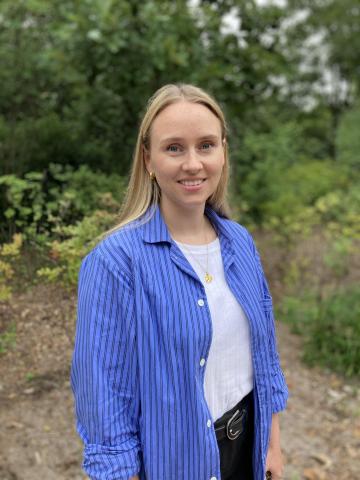 Ellinor Alseth works on the bacteria Acinetobacter baumannii mainly because she’s curious about its unusual evolution and ecology, but also because it’s an important pathogen.

“I’ve always thought that it would be nice if you can answer clinically relevant questions and more broadly evolutionary ones at the same time. Maybe I’m just very ambitious, but I don’t see why those two things always have to be so separated,” she said. Research funding is often siloed to answer either medical or basic research questions, less often both on a single project.

Alseth is in the right place to be ambitious. She started this March as the first Early Career Award Fellow at the Center for Microbial Dynamics and Infection (CMDI) at Georgia Tech, which prides itself on building connections across disciplines. Its 12 participating labs hail from three schools in the College of Sciences: Biological Sciences, Physics, and Chemistry and Biochemistry. They share a common research focus on the role of microbes like bacteria and viruses in human and environmental health.

The fellowship will fund Alseth and her research for three years. “There’s nothing like this on campus, to my knowledge,” said Sam Brown, CMDI’s director. The most important aspect of the fellowship, he said, is independence: “It’s unusual to be able to put junior scientists truly in the driver’s seat with their research agenda, especially at the junior postdoc level. We have a panel of mentors that offer support, but not instruction.”

That promise of independence was a major pull for Alseth, who moved from Europe to Atlanta for the fellowship. She’s from Norway and completed her Ph.D. at the University of Exeter in the United Kingdom, and cited the chance to do interdisciplinary microbial research at CMDI as a primary reason she decided to make the move.

“It’s nice to complement my evolutionary and ecology skills with molecular work, because that’s where I feel like I have the biggest gap in knowledge,” Alseth said. Studying molecules (such as chemical signals between bacteria) requires quite a different set of skills than ecology and evolution. “And CMDI has everything you could possibly dream of for answering fairly complicated molecular questions.”

Alseth’s research in CMDI will focus on phage therapy, combining approaches and ideas from community ecology, evolutionary biology, and molecular biology. Phages are viruses adapted to infect bacteria, and they are harmless to humans. That means they can serve as alternative or supplemental treatments to antibiotics, with fewer side effects. Many bacteria have evolved to escape and resist antibiotics, leading to a major global public health threat expected to worsen in the decades ahead. Phage therapy is one possible solution in an arsenal of tools, but it is not nearly as well-understood as therapeutic drugs.

Phage therapy is typically a last-ditch therapy after antibiotics have failed. However, fighting biology with biology is complex and may have unintended consequences. “Phage therapy is the concept that ‘the enemy of my enemy is my friend,’” Alseth said. “But as an evolutionary biologist, I want to know what the consequences might be. How will the bacteria respond? The worst-case scenario is that [scientists] will do what we did with antibiotics and go in blind, thinking we have a solution that will last forever.”

So, Alseth is working with the bacteria Acinetobacter baumannii to understand how it evolves to resist phages. A. baumannii is one of the so-called ‘ESKAPE’ pathogens, an acronym of the names of six bacteria that are resistant to many antibiotics and commonly spread in hospital settings. A. baumannii is interesting to Alseth because “It’s very good at scooping up DNA from its environment,” which helps it evolve to escape antibiotics by picking up genes from other microbes around them. In hospitals and in the human body, A. baumannii may be surrounded by other bacteria. Each species is evolving new strategies to escape its phage, and A. baumannii might be able to develop a formidable defense strategy by combining them all.

Alseth’s Ph.D. research, published in the journal Nature, found that growing multiple microbe species together affected the course of phage resistance evolution in the more commonly studied bacteria Pseudomonas aeruginosa. Although Pseudomonas is studied by several labs in CMDI, for her postdoctoral studies Alseth chose to switch to A. baumannii, a species that she found had strong effects on evolution of other bacteria. Alseth noticed there was very little known about its evolution and ecology. “I realized that there is a gap here that I was quite curious about,” she said.

That interdisciplinary curiosity was important to the fellowship selection committee, said Brown, the CMDI director. Another reason Alseth was a good fit was her impactful research: “science that would change the way other people were doing science,” as he put it. “This is a great way to bring the brightest talent to Georgia Tech, because we’re offering an unprecedented deal in terms of the fellow’s ability to lead their own science, and that’s really valuable.”

“Looking to donors, the hope is that we can extend our funding, and really expand this to have a cohort [of fellows],” Brown added, which would continue to boosting the research agenda and profile of CMDI, College of Sciences, and Georgia Tech. “We hope and expect this is the launching pad for really bright careers.”

Story and photo by Carina Baskett.