Observations of Lightning on Jupiter Featured in Nature Cover Story 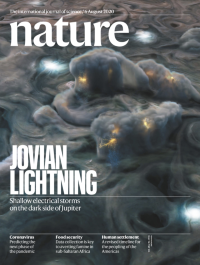 The cover story for the August 6, 2020 issue of Nature features the optical observations of lightning flashes on Jupiter made by the Juno spacecraft. The article, “Small lightning flashes from shallow electric storms on Jupiter,” was written by select members of the NASA Mission Juno team. The team includes Paul G. Steffes, professor emeritus in the Georgia Tech School of Electrical and Computer Engineering (ECE). Steffes is a member of the Center for Space Technology and Research (C-STAR), which is co-led by Thomas Orlando (Chemistry and Biochemistry) and Glenn Lightsey (Aerospace Engineering). A pdf of the full article may be downloaded here.

An Atlas V rocket lofted the Juno spacecraft toward Jupiter from Space Launch Complex-41 on August 5, 2011 at NASA Kennedy Space Center. The four-ton (when launched) Juno spacecraft entered Jupiter’s orbit on July 4, 2016 and began sending data to the Juno mission team, so they can study its structure and decipher itshistory and that of other planets in the solar system. Steffes’ specific role in the mission is to study measurements from Juno’s microwave radiometer to examine Jupiter’s deep atmosphere in order to learn what Jupiter is made of. The prime Juno mission will end in June 2021, and NASA is now considering extending the mission.

To learn more about past findings of the Juno mission, read the Georgia Tech news release, Juno Mission Reveals Jupiter’s First Surprises, which was published on May 25, 2017.

For more details and highlights, the Mission Juno website contains a detailed history of the mission and highlights of the latest science results.

School of Electrical and Computer Engineering